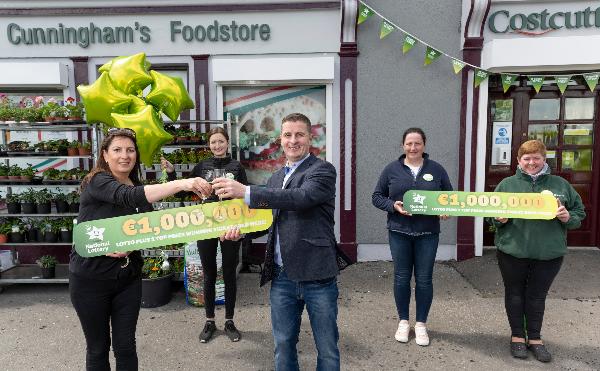 The Lotto Plus 1 top prize winner from Mayo, who won €1,000,000 on the same night, purchased their winning Quick Pick ticket at Cunningham’s in the village of Belcarra located just outside Castlebar

A busy Midlands service station in Athlone has been confirmed as the winning location for last Saturday’s winning Lotto jackpot ticket worth €6,489,165. The winning Quick Pick ticket was sold on Thursday 20th May at the Applegreen service station located just off the M6/N6 motorway in the Arcadia Retail Park in Athlone, Co. Westmeath.

Speaking at today’s announcement, Isaias Garcia,site manager at the Applegreen service station in Athlone said, “It's thrilling news and we were absolutely delighted to find out that the lucky ticket was bought here at Applegreen Athlone. We’ve been talking about nothing else ever since, and the team is having lots of fun with it. Nobody knows who the lucky customer is but we hope they enjoy their new life. Are we jealous? Maybe a tiny bit but I suppose if you’re not going to buy a winning lottery ticket, the next best thing is selling one!”

The Lotto Plus 1 top prize winner from Mayo, who won €1,000,000 on the same night, purchased their winning Quick Pick ticket at Cunningham’s in the village of Belcarra located just outside Castlebar.

Shop owner Paul Cunningham was overjoyed to hear the good news from the weekend: “Myself and my wife Patricia were delighted when we got the call from the National Lottery as this is the largest prize that our store has ever sold – before this, our largest prize had been €25,000 so it’s quite a jump! We have a small team so when news gets out to the rest of our team, there will be great excitement I’m sure. A lot of our customers would be local so it’s great to think that someone in the community has become a millionaire since Saturday. We wish the winner all the best with their win.”

The West of Ireland winner became the second large Lotto winner from Mayo in the space of a week after a player from Killala matched five numbers and the bonus in last Wednesday night’s draw to win €106,931.

The National Lottery continue to urge Lotto players in Athlone and Castlebar to check their tickets carefully as Ireland’s two newest Lotto millionaires have yet to come forward. Both players are advised to sign the back of their tickets and keep them in safe places. They should contact the prize claims team on 1800 666 222 or claims@lottery.ie and arrangements will be made for them to claim their prizes.