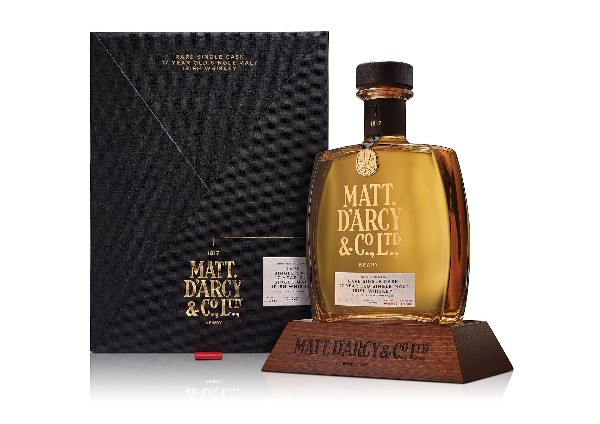 Among the other awards for the Newry-based whiskey company was a Double Gold medal for its super-premium 17-year-old single malt, which is only awarded when all judges unanimously deem a product to be of gold-medal standard. Products to achieve this are considered amongst the finest in the world.

The company was also awarded Gold in the Blended Irish Whiskey category for its 10-year-old port-finished blend - a whiskey that is rich on the palate with plenty of dried fruit sweetness and a touch of oak.

The San Francisco World Spirits Competition is considered one of the most influential spirits competitions in the world. This year saw a record-breaking 3,000 entries from around the world.

Throughout four days of highly controlled blind tastings, the judging panels taste every product to decide if it is medal worthy. Judges do not receive any information on producer or price point, ensuring each spirit is judged fairly, equally, and without bias.

The return of Matt D’Arcy

While Matt D’Arcy was a prominent name in whiskey making in the 1800s and 1900s, production stopped at the Newry distillery more than 100 years ago.  It has since been revived by historian and founder Michael McKeown and the company launched to market earlier this month.

Despite launching in the midst of a global crisis, Andrew Cowan, CEO of Matt D’Arcy & Co. Limited has reported strong early sales.

“Currently our whiskies are available exclusively at the Celtic Whiskey Shop (CelticWhiskey.com).  Our first delivery sold out within days, and winning gold and double gold at the San Francisco World Spirits Competition will really help us in reaching the US market, which is so important for Irish whiskey sales,” said Andrew Cowan.

“To be recognised for an award so soon after launch is an incredible achievement for all of our team but more importantly, is a testament to the quality and taste of our whiskey. To say we are over the moon would be an understatement.”

Quality, taste and passion at the heart of Matt D’Arcy

Andrew Cowan has worked in the drinks industry for many years and is a direct descendant of the Cowan family of Edwardian Whiskey Bonders. His grandfather, and his father before him, were wine and spirit merchants who bonded and blended their own whiskies and ran a number of bars in Armagh city.  Andrew is chair of the Irish Whiskey Association Tourism Subcommittee and in addition to looking after the operational side of Matt D’Arcy, he was involved personally at every stage of the development and production of the whiskey.

“I was really focused on finishing and maturation and rejected many casks before finding the perfect rum flavour profile to enhance our 17-year-old blend,” said Andrew Cowan.

“For our 10-year-old I worked extensively on all blending and finishing with taste and mouth feel being the key priorities for me.  I’ve a real passion for what we are doing at Matt D’Arcy and that means getting involved with every aspect of the business.”

Like the 10-year-old whiskey, some might say CEO, Andrew Cowan, and Business Owner, Michael McKeown, are a perfect blend of knowledge for a business such as Matt D’Arcys.

Former president of the Newry Chamber of Commerce, Michael started out working at the family business Reihill-McKeown, a bottler and drinks business, which was later sold to Irish drinks giant C&C.

A local historian, Michael’s interest in the old whiskey distilleries in and around Newry fuelled his passion to revive one of the greatest. “What started out as a history project has now become a huge business undertaking, which will put Newry back on the map in terms of whiskey distilling. We are passionate about what we are doing and it’s great to see that our whiskey, which was world-renowned more than 100 years ago, starting to gain back its world-reputation with three internationally-acclaimed awards just as it returns to the market,” said Michael McKeown.

The Northern Irish whiskey brand is planning to release further batches later in the year is currently available to purchase exclusively at www.celticwhiskeyshop.com