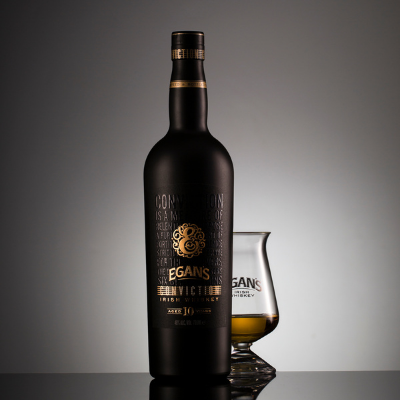 Egan’s Irish Whiskey has added a new whiskey to its core range, Egan’s Conviction. The new expression is a blend of single malt and single grain Irish Whiskey, no less than 10 years old, each aged in bourbon barrels and married together in XO Cognac casks.

The latest addition to the Egan’s range has been named category winner at the World Whiskies Awards 2022 for Best Blended Whiskey (12 Years & Under), announced at the end of February.  Non chill filtered and finished in XO Cognac barrels, Conviction shows an opulent aroma, defined by floral cereal grains, honey and dried apricot. On the palate the whiskey delivers leather, marzipan, and hints of ginger, lifted by zesty citrus. Long and lingering, the finish closes with hints of liquorice and vanilla.

“Conviction is a word meant to extol the virtues not only of our heritage, but also of what we expect to accomplish in the future,” said brand founder Jonathan Egan. “The generations of talented whiskey men and women who came before us were known not only for their powerfully held beliefs, but their good works as well. We strive to continue on the path they defined with this exciting bottling.”

Originally established by brothers Henry and Patrick Egan in 1852 in Tullamore, Co. Offaly, P.&H. Egan Ltd was known to produce some of the finest Irish whiskey in the world for over 100 years. In 2013, fifth and sixth generation family members Maurice and Jonathan Egan restarted the dormant enterprise and have since been sourcing and ageing expressions that celebrate their lineage.

“Egan’s Irish Whiskey is incredibly proud of its history,” said John Ralph, CEO of Intrepid Spirits, the brand’s distribution partner. “With an eye to the traditions from which we have come, we endeavour with each bottle to create a legacy for the future.”

Bottled at 46% ABV, Egan’s Conviction is priced at €90 RRP per 700ml bottle. Egan’s Irish Whiskey is part of the Intrepid Spirits portfolio. For more information, visit www.eganswhiskey.com or connect on Instagram @egansirishwhiskey.