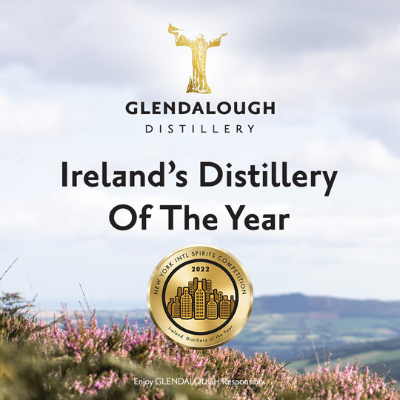 Glendalough, the Wicklow based Distillery has just been awarded the prestigious accolade of Irish Distillery of the Year at the New York International Spirits Competition. Already a multi-award winning distillery, the competition also awarded Glendalough Double Gold for its new Mizunara Single Malt and Double Barrel whiskeys and Gold for its Wild Rose Irish Gin.

Glendalough Distillery, which was founded in 2011 by a group of friends who had a shared passion for reviving the heritage of craft distilling in Ireland have since become part of Mark Anthony Brands International. Following this prestigious win, Glendalough has firmly established itself as one of Ireland’s leading premium craft spirits brands. The Irish Distillery of the Year award is not an annual occurrence. Rather it is a prize bestowed as an when it is appropriate, making it all the more coveted and important.

Glendalough’s 7 year old Mizunara single malt whiskey which received double gold is aged in Japanese Mizunara casks from the island of Hokkaido in Japan. The whiskey is fruity and floral and is luxuriously smooth in texture. It has a hint of dark orange chocolate, sandalwood and cinnamon.

Enda O’Sullivan, VP of Spirits Mark Anthony Brands International said, “It’s an exciting time for Glendalough, our Wild Gins are fresh-distilled from hand-foraged, wild botanicals in the Wicklow mountains. Our Irish Whiskeys are the result of a relentless search for the finest, most flavourful species of oak in the world, not least Irish oak from our surrounds in the Wicklow mountains. These awards are testimony to the drive and ambition of the Glendalough team who strive for the very best in all they do. Securing double gold for our Mizunara and Double Barrel whiskies as well as gold for our Wild Rose Gin is a huge achievement but to also be named Irish Distillery of the Year is an incredible result. We’re so passionate about crafting liquids with a profound sense of place, to have Glendalough recognised on the world stage gives us renewed ambition for the future.’’

Glendalough’s award-winning craft spirits are available in O’Briens (Nationwide), Celtic Whiskey Shop (Dublin), The Vineyard (Belfast), Carry Out (Killarney), Kelly’s Off Licence (Clontarf) and all good independent off licences. For more information on Glendalough Distillery’s entire portfolio, visit their website and follow them on social @glendaloughdistillery to keep up to date with the latest news.