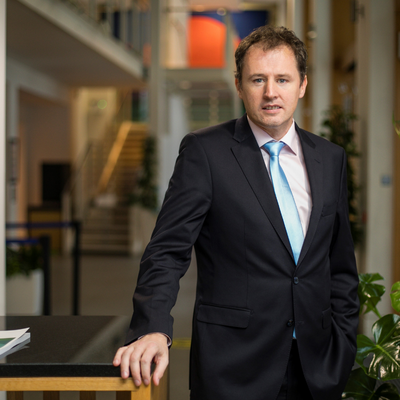 The rising cost of living is affecting every family across the country, as well as every business owner, including retailers. The Government are all too aware of the issues, most of which stem from macro-economic events out of their or our control, such as Russia’s invasion of Ukraine, which have pushed commodity and energy prices to previously unseen heights.

“It has been a challenging time,” admits Charlie McConalogue TD, Minister for Agriculture, Food & the Marine. “It’s something the Government has been monitoring very closely. We have made a number of interventions to try to address the cost of living challenges that families are facing, that consumers are facing, and also in the agriculture and food space, to try to support food producers as well in relation to the costs that are there, and this is something we will continue to monitor as we get closer to the Budget in the autumn.” The challenges around rising energy costs will move into sharper focus as we move into autumn, the Minister acknowledges, promising that he and his Cabinet colleagues will look at that “particular consideration”.

His Department have made significant investments in introducing schemes to alleviate pressure on Irish agri-food, focusing on the sectors most exposed by macro-economic events, including pigmeat and horticulture in particular, while also introducing a tillage incentive scheme and a fodder support scheme to support the foodproducing sector. “We can’t do it all, but it is something we are very conscious of and will continue to be the key priority for this Government in terms of the Budget package this autumn,” the Minister acknowledges, admitting that “the challenges around energy and fuel costs are particularly difficult”, with no easy fix. “It becomes an erosion of resources and an erosion of wealth, which doesn’t really benefit anybody,” the Minister admits.

“Prudent and sensible management is vital, to try to support people as best you can without exacerbating the problem. These costs have to be factored into the supply chain but we all have to work to minimise their impact and at the end of the supply chain is the consumer, and the Government is going to have to be very conscious of in relation to the Budgetary packages to help and support families.” In a worst case scenario, where there could be potential rationing of oil and gas supplies, the agri-food sector would “absolutely” be prioritised, according to the Minister: “The same as it was during the pandemic, the production of food is an essential activity and were there to be any challenges around fuel, and every effort is being made to ensure that is not the case,but if there were to be, the production of food would have to be prioritised and that is something that is agreed at Government.” A perfect macro-economic storm? Events of the last couple of years, with the twin challenges of Covid and Brexit, followed by the invasion of Ukraine, have delivered one macro-economic storm after another. It’s been a challenging time to be Agriculture Minister.

“There have been big challenges there,” he sighs. “Brexit was the big challenge at the outset of my term; it was the big concern in relation to whether we would have a Trade and Co-operation Deal or not, whether there would be tariffs, making the preparations in relation to the introduction of the various checks [at our borders], and what it would mean in relation to trade. Thankfully, the agri-food sector has proven very resilient and stood up very well and has kicked on. That was followed by the Covid pandemic and now this [the invasion of Ukraine], so I think it’s fair to say that these challenges have been structurally bigger than what would be normal. But I think the sector has responded well to Brexit, responded well to keeping supply chains going during the pandemic and is responding well now to the effects of what is happening in Ukraine.”

Office for Fairness and Transparency The last few years have proved the agility of Ireland’s food and retail sector in adapting to huge change. In the coming months, the biggest change coming down the tracks is legislative, in the shape of the Agriculture and Food Supply Chain Bill, which will establish a new independent statutory Authority to be known as the Office for Fairness and Transparency in the Agri-Food Supply Chain. The objective of the new Office will be to promote the principles of fairness and transparency in the agricultural and food supply chain, and it will principally do this in two ways: by performing aprice / market analysis and reporting function, and by becoming the State’s designated enforcement authority for enforcing the rules on Unfair Trading Practices in business-to-business relationships in the agricultural and food supply chain. “It’s about introducing more trust and transparency into the supply chain by establishing an office on a statutory footing which is separate and independent, and can speak and act with authority in relation to improving supply chain relationships,” explains Minister McConalogue. One of the arguments in the past was that while certain regulations may have been in place, those charged with enforcing them didn’t have the power to impact on the sector. This, the Minister promises, will be different and the new office will have teeth. “It certainly will have teeth,” he insists. “We haven’t had an Office like this before; this is about an independent and credible statutory actor that can oversee the food supply chain to try to ensure there is fairness throughout, to influence and set good practice. You can’t set prices – some people would like to see that but it’s not how a market economy works – and 90% of the food we produce goes abroad, so the price you get for your product is determined by international markets, things we don’t control; we can control the quality of our product and try to add value, to premiumise it as much as we can, to ensure that we have the best quality possible to export so we can get the best price on independent markets. What we need to do is to trace that back to the various actors in the supply chain, so we can shine more transparency on that, and bring confidence and fairness to the supply chain and in doing so, apply as much pressure as possible on the system to ensure that the farmers and producers get fair treatment for the massive contribution they make. Having someone who is independent, has a defined role and isn’t aligned with any stakeholder, is vital.”

The Minister feels that the new law will “strengthen the position of smaller suppliers who are dealing with larger entities…putting in place fines and penalties where the position of power is abused”. When the new Office is in place, overseeing the supply chain and adjudicating on Unfair Trading Practices will move from the Department of Agriculture to the new office. The Minister is confident the Bill will move through both houses of the Oireachtas without delay and indeed, the recruitment process for the new Office is already underway, with the Minister stressing how “the leadership team and the role of CEO will be very important in driving good practice in the supply chain.”

This time last year, the Minister and his department were putting the finishing touches to Food Vision 2030. A year later, it has been published, tying in with the Climate Action Plan, all moving in the same direction towards a sustainable future, and reducing emissions.

“We have timelined the various actions to deliver on the Food Vision 2030 plan and people are getting behind it,” he notes. “The fact that all stakeholders and all legislation is pointing in the same direction is vitally important. It is about continuing to produce quality food, while striving in any way we can to minimise the emissions footprint of how that food is being produced.” Producing food sustainably is not just important from an environmental point of view but will also make a difference to companies’ and farmers’ balance sheets, the Minister stresses. “Adopting lots of these measures can improve the bottom line from a farmer’s point of view. Of course, it’s also hugely important in terms of the quickly evolving consumer attitudes, not just nationally but internationally, in relation to how people perceive food, its health credentials, its nutrition credentials and also its sustainability credentials. Is food being produced in the most carbonefficient manner possible? Is it produced in a way that is positive for biodiversity and the environment?

People want to see that, they want proof of that, and they increasingly want to purchase food that can show that. So for a number of reasons, it’s important that we go in that direction.” Ireland has led in the sustainability arena through initiatives like Bord Bia’s Origin Green, the multi-stakeholder, whole of industry approach to sustainability, which fast became the envy of other agrifood economies and recently celebrated its 10th anniversary. “Origin Green really was ahead of its time,” the Minister notes. “That initiative has been really important in relation to telling the story of Irish food, and it is going to be more important to deepen and broaden that story. Irish food quality is well known around the world but it is important that we double-down on that, which will be what keeps our place in the markets internationally, and that we play our part in reducing emissions as a sector.”

Read the full interview in our latest issue: https://issuu.com/retailnews/docs/rn_sep22_low_res