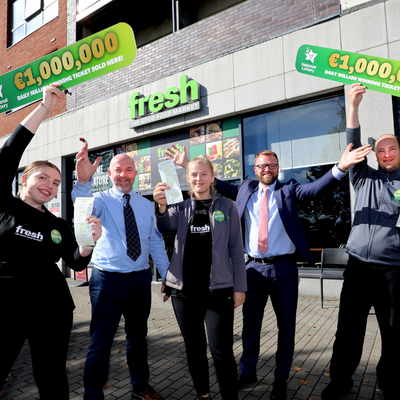 A grocery store chain in Dublin has been revealed as the selling location for yesterday’s (22nd of September) Daily Million top prize ticket worth a whopping €1,000,000. Fresh, the Good Food Market, in Northern Cross, Dublin 17, sold the winning normal play ticket on the day of the draw on the 22nd of September.  Thursday’s big winner has officially become the 29th millionaire to be made through National Lottery games in 2022.

Noel Smith opened the store in 2007, its one of nine ‘Fresh’ stores he owns around Dublin. He was delighted to get the call that one of his customers became a millionaire after a visit to their store. He said: ‘I’ve been a National Lottery Agent since 1992 and this is the biggest win we’ve had to date! There will be some buzz over the next couple of days with customers coming in and out checking tickets. It’s hard to believe that one of our local regular customers could now be a millionaire! It’s just brilliant news and I wish them the very best with their winnings".

The National Lottery can confirm the winner of yesterday’s Daily Million top prize worth €1 million has made contact with the Claims Department and arrangements are being made for them to claim their prize.