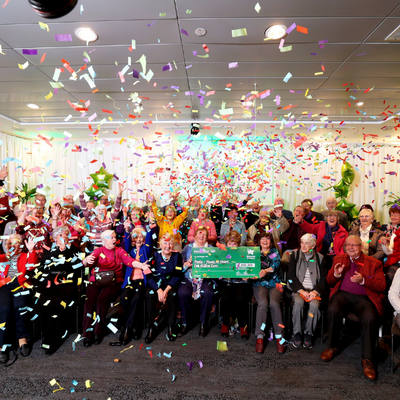 The Green and Red of Mayo was belted out in song today at National Lottery HQ when a syndicate of 47 claimed their Daily Million worth an amazing €1,000,000.

The syndicate are from a retirement group called ‘Young at Heart’, based in Parke located near Turlough just outside Castlebar in Co. Mayo.

The forty-seven-strong syndicate was formed seven years ago in January 2015.

Michael Cosgrave, spokesperson for the syndicate, described the utter shock he felt after finding out the group had won the amazing prize: “Ah, we were all so excited when we found out. Anne Kelly rang me and said, Woah we’ve won a big one! We’re so happy to be sharing this prize with each other rather than one individual winning it on their own. It means so much more to us as a group to experience this joy together”, he said.

Syndicate member Anne Kelly revealed how the group has already had a National lottery style celebration at one of their group meetings in Parke. “We had a meeting the Thursday after we’d won and we our own celebrations with bubbly, food and music. It was a real party, and the atmosphere was just electric! The whole community is really delighted for us”, she added.

A cruise, a trip to Greenland and a holiday of a lifetime are just some of the things members of the syndicate hope to do with their winnings.