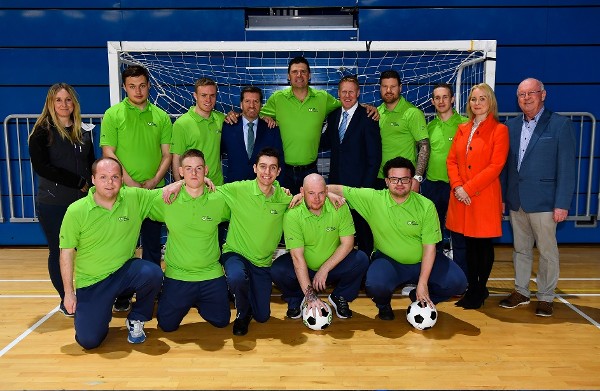 It was a Gala special moment for Special Olympics footballers as they met up with football legend Niall Quinn ahead of their travel to Abu Dhabi to compete in the 2019 Special Olympics World Summer Games.

Quinn joined the team on Friday to celebrate Special Olympics’ partnership with Gala Retail. Gala, one of Ireland’s leading convenience Groups, is not only an official sponsor for Team Ireland but has also supported the Special Olympics programme for the past five years.

This significant partnership by Gala Retail and its 200 stores is helping to fund the travel and participation of the 91-strong delegation of Irish athletes who are travelling to Abu Dhabi to represent their country.

“To earn the right to put on the green jersey is a phenomenal achievement in itself, these athletes are already winners. They should be proud and focus on not only giving a great performance but also enjoying every moment. I would like to wish all of the athletes the very best of luck at the World Games.” commented Niall Quinn.

Gala representatives joined Special Olympics Ireland CEO, Matt English, at the launch to celebrate the Group’s sponsorship commitment in helping Irish athletes travel to and compete at the Games.

Matt English, Chief Executive, Special Olympics Ireland adds: “Without the financial support of our sponsors like Gala Retail, it would not be possible to fund Team Ireland’s participation in the 2019 Abu Dhabi World Summer Games. We are thrilled that Gala Retail has partnered with us for its second World Summer Games, in addition to its support with the World Winter Games in 2017 and the Ireland Games in Dublin in 2018. Gala’s support goes beyond finances and there’s a natural synergy with local retailers championing our local athletes across the whole country at a grass-roots level all year round.”

Gala is one of four official sponsors of Team Ireland, sitting alongside Sport Ireland, SportNI and eir.

“We’re extremely proud to be supporting athletes in achieving their dreams and experiencing a once-in-a-lifetime opportunity. This is something that Gala Retail and all of our stores are committed to and we’re looking forward to a very special Summer Games in Abu Dhabi where many #GalaSpecialMoments will be captured.”

All of Gala’s stores will be decked out to cheer on Team Ireland this month and Special Olympics athletes will exclusively reveal their #GalaSpecialMoments from the World Games via Gala’s social media channels.

From 14th to 21st March, 91 athletes from 26 counties will be representing Ireland at the 2019 Special Olympics World Summer Games.