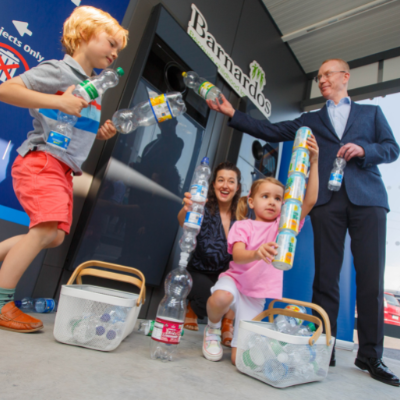 ALDI today launched Ireland’s largest reverse vending machine at its Naas, Monread Road store in Co. Kildare. ALDI’s newest unit is capable of collecting and storing up to 10,500 plastic bottles or 42,000 aluminium cans at any given time.

The trial follows the success of ALDI’s first reverse vending machine in its Mitchelstown, Cork store as well as the launch of a new machine at its Mallow store. The recycling initiative comes with a twist, with a total of €1,000 per month being donated to ALDI’s charity partner Barnardos.

From today, ALDI’s Kildare customers are encouraged to return PET plastic bottles (up to three litres in size) and aluminium drink cans to the reverse vending machine in ALDI’s store.

ALDI’s Mitchelstown reverse vending machine has experienced great demand since its introduction in February. Almost 12,500 PET plastic bottles and aluminium drink cans have been recycled through the unit, with a monthly donation of €1,000 going to Barnardos since its launch.

Commenting, Donald Mackay, Regional Managing Director, ALDI Ireland said: “Following the success of our initial reverse vending machine, we are delighted to install Ireland’s largest machine at our Naas store. Having a machine with larger capacity means we can make an even greater impact on the environment and with our charity partner Barnardos. Through this initiative, we’re encouraging our customers to give to Barnardos, which is doing amazing work with vulnerable children and families, while also helping to improve the environment.”

Welcoming the initiative, Evie Sammon, Mayor of Naas said: “As Mayor of Naas I am delighted ALDI has chosen its Naas store for the largest reverse vending machine in Ireland. It’s not only going to benefit the environment but will also benefit children across Ireland through its charity partner Barnardos. I look forward to it being used widely.”

Barnardos CEO Suzanne Connolly welcomed the donations from the initiative: “The €1,000 monthly donation from ALDI will help make a real difference to the vulnerable children and families we work with across the country. Barnardos has been supporting children and families for 60 years, and we know that the funds generated from this scheme will have a real positive impact on the lives of children across Ireland.”

Senator Vincent P. Martin, Founder and Chairperson of Going Plastic Free Ireland added: "It is fantastic to see ALDI Ireland introducing this new reverse vending machine with even greater capacity. Going Plastic Free Ireland is delighted to support ALDI's efforts in improving the environment, while also supporting the great work Barnardos is doing in Ireland. We look forward to engaging with ALDI in the future in the positive steps it is making to remove unnecessary plastic from our local communities.”

ALDI established a long-term partnership with Barnardos in 2020 with the aim of raising €1 million for the children’s charity. The supermarket has raised over €710,000 for Barnardos to date through a series of exciting initiatives including the launch of its first cookbook ‘Home’ alongside the IRFU, with all profits going towards Barnardos’ Early Years and Family Support Services.

ALDI also partners with the national charity FoodCloud, providing surplus food to those who need it most. To date, ALDI has donated 2.35 million meals to FoodCloud, equating to a saving of almost €3 million while also benefiting the environment, saving an equivalent of almost 3.2 million tonnes of CO2.

ALDI has been recognised for its fantastic work in sustainability through a number of recent award wins, including being awarded the title of ‘Green Retailer’ at the 2022 Green Awards, and being voted Ireland’s Most Sustainable Supermarket by Irish Shoppers in the Ireland RepTrak Sustainability Index 2021.