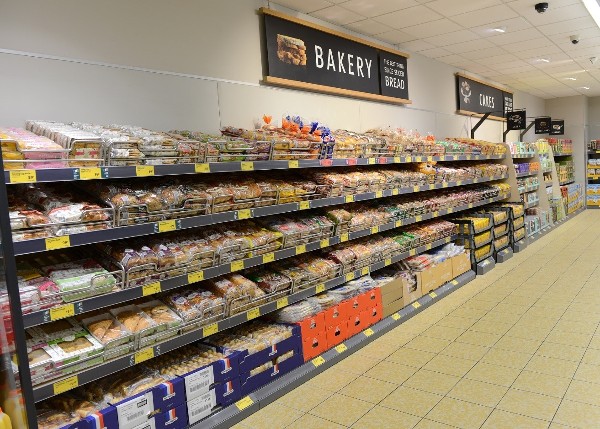 Aldi’s Gort “Project Fresh” store has reopened its doors to customers following an extensive renovation project which has seen the store completely refurbished as part of Aldi’s €160m investment in its Irish store network. Aldi has committed €100m to constructing and opening 20 new stores, while Project Fresh sees Aldi invest a further €60m in revamping the layout and design of all of its 142 stores nationwide.

Featuring the new layout, Aldi’s Gort store offers a wide selection of fresh food at the front of the store, hi-spec fixtures and fittings and new signage that provides a more efficient and hassle-free shopping experience.

The store will be powered by 100% green electricity. Aldi has invested heavily in improving its energy management systems and its entire store network is now powered by 100% wind generated energy.  Aldi was the second retailer in Ireland to achieve ISO 50001 accreditation in recognition of its efforts to improve energy efficiencies.

Aldi’s Gort store participates in Aldi’s national partnership with FoodCloud, donating surplus food to local charities daily.  The store has donated over 1,000 meals to its charity partners to date.  Aldi Gort is also part of Aldi’s Community Grants network, with Burren Animal Rescue just one of several charities availing of the €500 bursary grants this year.

Speaking at the reopening, Patrick Coffey, Aldi Gort Store Manager said: “The Project Fresh revamp of our store is great news for our customers.  Its new spacious design makes for a very easy and enjoyable shop.”

“Our commitment to our customers is we will never be beaten on price and will always provide the best value. Our Swap and Save campaign continues and the goal of this campaign is to remind shoppers about the saving that can be generated by swapping their weekly shop to Aldi.”

Aldi is committed to growing its Irish supply base and increasing the number of Irish products available in its stores.  It has invested more than €1,500,000 in its Grow with Aldi supplier development programme since 2018, which offers up-and-coming artisan Irish food and drink producers the chance to have their products listed in Aldi’s 142 stores.  Aldi also recently increased its support for small Irish suppliers by reducing its payment terms to 14 days for suppliers that transact up to €300,000 annually with Aldi.

Aldi will sell over €750 million worth of Irish goods this year, sourced from Irish producers, manufacturers and suppliers across the country.

Aldi has been Ireland’s fastest growing supermarket for most of the last ten years, achieving a 11.4% market share (Kantar Worldpanel data).

Employing almost 4,000 people, the company operates a network of 142 stores across the country, with stores in each county in the Republic of Ireland.

Aldi is investing €160m to expand and upgrade its Irish store network. It has committed €100m to constructing and opening 20 new stores, while Project Fresh sees a further €60m investment to revamp the layout and design of all 142 Aldi stores nationwide.

Aldi is attracting thousands of new customers in Ireland every year with its range of award-winning products and exclusive brands.

Aldi was the number one Irish retailer at the 2019 Great Taste Awards, with four of its own-brand products winning the most coveted three gold stars award - more than any other supermarket in Ireland.  Aldi also won 30 Blás na hEireann Awards and 40 Irish Quality Food Awards in 2019.

Aldi was ranked as the most reputable supermarket in Ireland by Irish consumers for the third year in a row by the prestigious RepTrak survey.

The company’s current initiatives include: