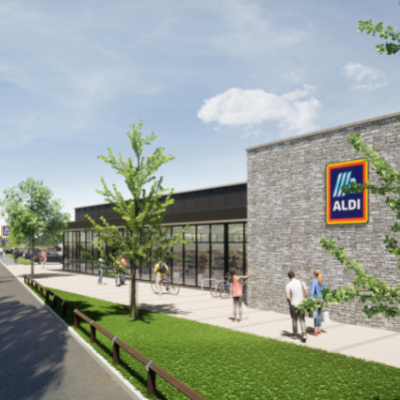 New research has found huge support among shoppers surveyed in Dooradoyle for a new Aldi store in the town.

A study of shoppers living or working in Dooradoyle by leading independent market research agency Behaviour & Attitudes revealed 9 out of 10 (88%) shoppers interviewed claimed having an Aldi store in the town would mean better value grocery shopping.

The research findings were revealed as Aldi unveiled plans for its new store on Dooradoyle Road. Up to 30 permanent positions will be created upon opening, while up to 50 jobs will be supported during the construction period of the new store, due to open at the end of 2024.

The new store, which is being built on a previously unused greenfield site, will feature Aldi’s award-winning Project Fresh layout. The 1,315 sq. metre store will be powered by 100% green electricity, supported by 90 sq. metres of solar panels on its roof. The new store will also feature a unique grass roof.

Customers will be able to benefit from four electric vehicle charging points, along with 10 bike parking spaces. There will also be 95 free-to-use car parking spaces for customers.

“We understand customers are always looking for more sustainable ways to shop with us, and our Dooradoyle customers can rest assured our new store will feature several green features including solar panels on the roof, 100% green electricity and electric vehicle charging points.”

Earlier this year, Aldi was granted final planning permission by An Bord Pleanála to open its new store on Roches St., Limerick City, which is set to open in mid-2023 and will be Aldi’s fourth store in Co. Limerick.

All of Aldi’s stores in Limerick are deeply involved with their local communities. To date, the stores have donated over 41,000 meals to local charities through FoodCloud, saving the charities nearly €52,000. Each store is also part of Aldi’s Community Grants network, with Limerick Animal Welfare, Butterfly Club and ADAPT Domestic Abuse Services some of the many local charities that have availed of the €500 bursary grant in recent years.