Coca-Cola partners with Tyler, The Creator to launch new “Open That Coca-Cola” campaign 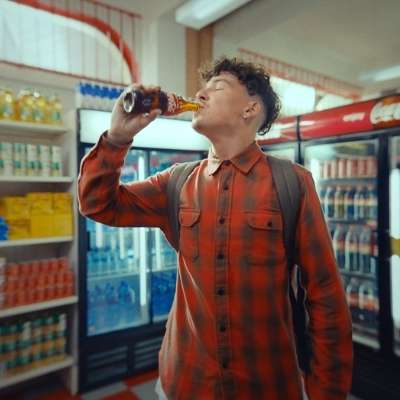 Coca-Cola Ireland has today partnered with Tyler, The Creator, to launch its new campaign, Open That Coca-Cola, which celebrates the Coke experience, whether it’s enjoying a Coca-Cola Original Taste, Coca-Cola Zero Sugar or any of its flavour variants, by giving new drinkers a way to describe this beyond-words experience.

The unique, refreshing taste of Coca-Cola has been uplifting the world for generations. It’s an experience that only enjoying a Coca-Cola can offer, yet one that’s nearly impossible to describe in words.

A study conducted by YouGov revealed that people are lost for words when it comes to describing their favourite moments in life, with 66% of all Irish adults believing the best experiences are difficult to explain with words. One of those being enjoying life’s simple pleasure of drinking a Coca-Cola. 51% of people found it impossible to put into words the unique feelings experienced when drinking a Coke. Three in four (74%) young adults (18–24-year-olds) can’t compare the taste or experience of drinking a Coke with any other experience in the world. 62% of 18–34-year-olds said that for them, the experience of drinking Coca-Cola goes beyond just taste.

A brand-new campaign, ‘Open That Coca-Cola’, launching today, brings to life the first sip of Coca-Cola and the expressions used to convey the refreshing great taste and experience of upliftment, and enjoyment when drinking it, like Ahhhh! Oooh! Yeah!

To encapsulate that undefinable feeling, Coca-Cola has partnered with Tyler, The Creator. The visionary artist is a long-time fan of the brand and shares an authentic originality, allowing him to express the Coca-Cola experience in the way he knows best: through music.

Tyler’s created an exclusive track featured in the campaign, which truly brings to life the iconicity of a Coca-Cola through a unique interpretation highlighting this indescribable experience and taste. The track will be available on all streaming platforms from March 5th.

From highlighting the incomparable pleasure of the first sip, to the whole uplifting experience of enjoying a Coca-Cola, the campaign is also brought to life in the form of an exciting dance – the ‘Coca-Cola Kick-Shuffle’, which expresses the uplifting experience of drinking a Coke through fun movements that anyone can try out and enjoy. Fans are invited to recreate the moves and express their own interpretations of the Coca-Cola experience through dance accompanied by Tyler’s exclusive sound. The uplifting dance will be revealed by an iconic global social star known for her moves, in the coming weeks.

Tyler, The Creator said: “It was really cool to have the opportunity to work on a Coke commercial, forever grateful. The end result came out amazing.”

Karen O’Shea, Marketing Manager for Coca-Cola Ireland said: “We’re excited to launch this campaign to share with everyone what the uplifting and refreshing experience of enjoying a Coca-Cola really feels like, one we know so many fans around the world enjoy and we hope even more people try as well. We cannot wait for people to hear Tyler, the Creator’s new song and the Coca-Cola Kick Shuffle is full of fun moves that anyone can try out. Keep an eye on social over the coming months to see us bring #OpenThatCoke to life with influential Irish faces!”

Walter Susini, SVP Marketing, Europe commented: “The Coca-Cola experience has always been beyond words - from the anticipation of that first sip, to the full power of its taste and the continuous rediscovery each time you drink it. We’re so excited to launch this campaign to celebrate and express the iconicity of this experience, not through one single verbal description, but through music, movement and a universal language that can be recognised by each person that experiences Coca-Cola.”

The campaign continues the company’s ‘Open’ platform, which sees the brand inspire and uplift people to being open to new possibilities and experiences, whilst remaining optimistic amongst the challenging times. As a fully integrated campaign, Open That Coca-Cola will be launched via a TVC on the 21st February and be supported by online video and radio advertising, as well as interactive OOH, shopper activation and an ambitious digital and social media plan.

Open That Coke celebrates the iconicity of enjoying a Coca-Cola in a joyful way and aims to encourage people to try the uplifting and refreshing experience of a Coke. Share your Coca-Cola experience using #OpenThatCocaCola on Instagram, Facebook and Twitter.

Waterford Whiskey: New whiskeys from distiller and brand innovator of the year

Musgrave MarketPlace raises €48,000 for The Alzheimer Society of Ireland in 2020