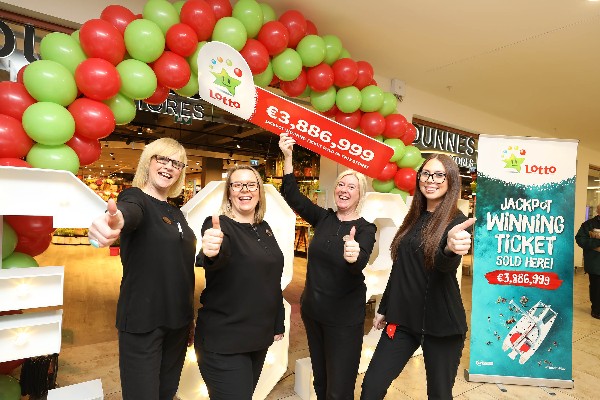 It was a life-changing day for two separate Lotto winners from Dublin after they each claimed a cheque for €3,886,999 after they won the €7.7 million Lotto jackpot on Wednesday 29th January.

A Dublin woman, who wants to remain anonymous, purchased her Quick Pick ticket at the Circle K Service Station in Kilmainham, Dublin 8. She found out that she had won half of the Lotto jackpot on offer when she checked her numbers while watching the Lotto draw live on the telly.  As life-long Lotto player, she admitted to misplacing her winning ticket at home, not once but twice after discovering she was the first Lotto millionaire of the decade! She said, “I am still in disbelief and when I discovered I was the winner, I said to myself ‘This can’t be me’. I haven’t even thought about how to spend my winnings, but I plan to carry on as normal and keep on working.”

The second Lotto jackpot winner who picked up his share of the €7,773,998 jackpot was a Dublin man who also wishes to keep his win private. The delighted Dubliner told National Lottery staff that he kept his winning ticket safely tucked underneath a statue of Padre Pio as he waited over a week to claim his multi-million euro prize. He purchased his all-important Quick Pick ticket at Dunnes Stores, Donaghmede Shopping Centre, on the north side of Dublin.

He knew he had a won a big prize when he scanned his ticket at a local shop and was told to contact the National Lottery. When asked what he was going to do after the big win, he said “We are going on a family holiday and then I am starting up my own business and going back to work. If anyone says ‘if you are not in, you can’t win’, they would be absolutely correct.”