Dublin Man to Buy Dream Home Following €500,000 EuroMillions Plus Win Offaly Woman Promises Her Five Children a Trip of a Lifetime to Disneyland After €50,000 TellyBingo Win 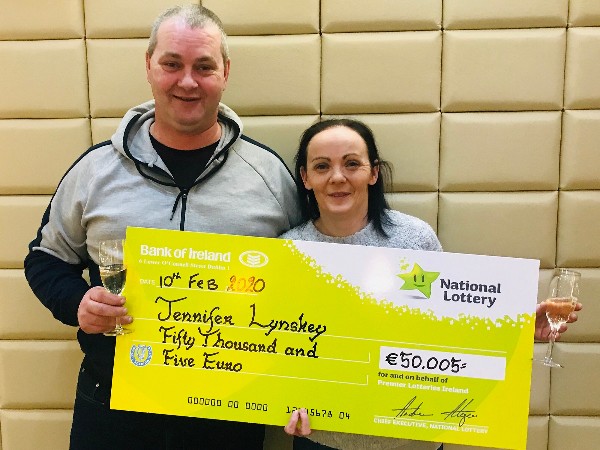 National Lottery headquarters in Dublin was a hive of activity on Monday following a bumper weekend of winners in EuroMillions and Lotto games.

Claiming one of the big prizes today was a young south Dublin man who won the EuroMillions Plus top prize of €500,000 in last Friday night’s draw. The delighted man who was joined by his family in the National Lottery winners’ room told how his massive win would allow him to fly the nest and buy his own home after years of saving for a mortgage.

“The plan was always to move out of my family house but now I’ll be able to do it a lot sooner than expected. I have been saving for a mortgage for a long time and I had promised my mother that I would be moving out soon so I think she’s secretly delighted to see the back of me,” he laughed.

The winning Quick Pick ticket was purchased at the Bookstation newsagent in the Stillorgin Shopping Centre in Co. Dublin. Incredibly, this is the second EuroMillions Plus top prize to be sold in the store in recent months after they sold the same winning prize in October 2019.

The Dubliner has confirmed that he will enlist the support of a financial advisor to ensure that he can secure his future with his €500,000 win.

He said: “I’ve had my eye on a house recently but it was a little out of reach financially so I’m going to sit down with a financial advisor over the next few days to ensure I get the best advice on how I use the prize to purchase my home. It’s incredibly exciting.”

Also collecting a prize from National Lottery headquarters today was Birr native Jennifer Lynskey (pictured) who claimed a €50,005 Telly Bingo Snowball prize which she won on Thursday 6th February. The delighted mother to five children with her husband David, she plans to renovate her home after a well-earned family holiday to Disneyland Paris.

Want to share that winning feeling? Play EuroMillions. Tuesday’s EuroMillions jackpot is a guaranteed €17 million. Play in-store, online at www.lottery.ie or by using the National Lottery app by 7.30pm by Tuesday evening.