Felix and Robbie Williams team up in a purrfect pairing 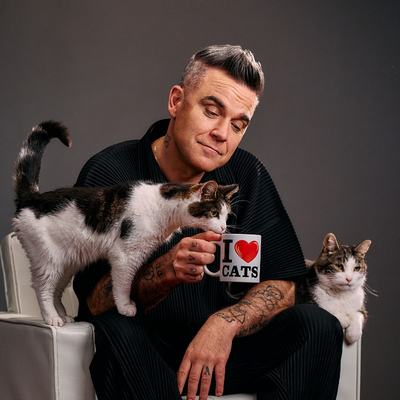 Purina, Europe’s leading pet care business announces that Robbie Williams has recorded a brand-new song, as the new voice of the most mischievous cat around, Felix. Felix the cat is, of course, the face of one of the best loved foods for Irish cats, with FELIX being one of the recognisable brands in Purina’s wide-ranging pet food portfolio.

The internationally acclaimed recording artist will star in a film premiere in which he will unveil a new exclusive track written and recorded specifically for this new Europe-wide FELIX advertising campaign, ‘It’s Great To Be a Cat’.

Taking inspiration from Robbie’s own adored cats, as well as the mischievous antics of Felix, the global superstar wrote and created an iconic track especially for Felix, celebrating the glorious life of cats. As the new voice of Felix, the musician takes a theatrical turn when he co-stars in a short film alongside (who some might say is the real star of the show) the infamous cat, Felix. The cheeky duo is captured getting up to mischief as they team up for the grand premiere of their new collaboration.  In the film, Robbie plays second fiddle to Felix as he tries to record the catchy earworm, with an accompanying orchestra.

Robbie Williams said: “The cat is out of the bag, I’m the new voice of Felix. I’ve been a long-time fan of cats, I’ve had many feline friends over the years and after studying their fascinating behaviour, I can confidently say, It’s great to be a cat.”

Available at FelixandRobbie.com, the new track shines a light on how cats really do live their best lives, just like the one and only Felix. Focusing on their independence, cheekiness and ability to always land on their feet, the song will be available to stream on Spotify from January 25th 2023.

Fabio Degli Esposti, Group Marketing Director at Purina said: “Combining our much-loved FELIX food and treasured Felix-the-cat character, with the one-and-only Robbie Williams, gives us our best recipe yet. The two being mischievous together in their very own film premiere, shows exactly why they’re the perfect fit”.

Sarah Gallagher, Brand Manager at Nestlé Purina Ireland said: “We are so excited to launch our latest It’s Great To Be a Cat campaign with Robbie Williams. These two superstars really are the pURRfect match and the new track is one that will definitely get everyone in a playful mood.”

The launch of the partnership also debuts the premiere of Felix’s latest advert, which will air exclusively on YouTube at 5pm GMT on Wednesday 25th January. Following this, cat lovers and Felix fans can catch the new song on Radio, BVOD, You Tube, Meta and Spotify.

To find out more and to stream Felix and Robbie William’s new song head over to FelixandRobbie.com.