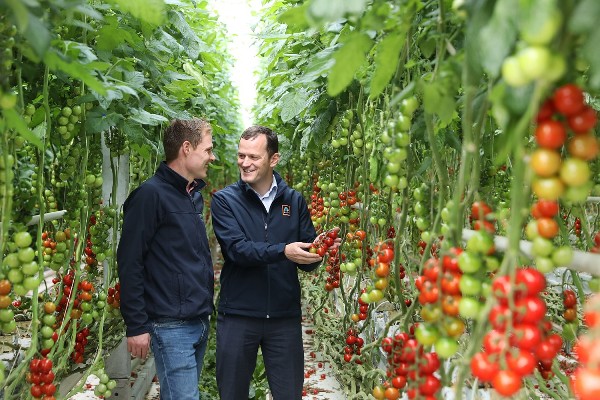 Flynn’s Tomatoes has been heavily involved in Aldi’s programme to remove and limit unrecyclable packaging from its supply chain. It became Aldi’s first fruit and veg supplier to remove all non-detectable black plastic trays from its produce earlier this year, replacing them with eco-friendly cardboard trays, saving 250 tonnes of avoidable waste.

Employing up to 20 people during peak season growing, Flynn’s Tomatoes is a third-generation family enterprise and is currently run by father and son team, William and Martin Flynn.  It has supplied Aldi’s stores since 2013.

This long-term commitment by Aldi has provided Flynn’s Tomatoes with the security to invest in and expand its operations in recent years. State of the art energy efficient glasshouses were installed in 2015, enabling a 40% increase in output.

Commenting, Aldi Group Buying Director, John Curtin, said: “Supporting local innovative Irish producers has always been a key priority for Aldi.  After 20 years of operating in Ireland, we are proud to say that this commitment continues to grow, with Aldi now working with over 200 Irish food and drink producers.  In terms of quality and taste, Flynn’s Tomatoes are second to none and we are delighted our customers will continue to enjoy the best of Irish produce.”

Welcoming the new deal, Martin Flynn commented: “This new long-term agreement with Aldi is a huge vote of confidence in our business. The principles of quality, sustainability, experience and taste are all vitally important to our business, helping Flynn’s Tomatoes grow a superior, fresher tomato compared to imported product.”