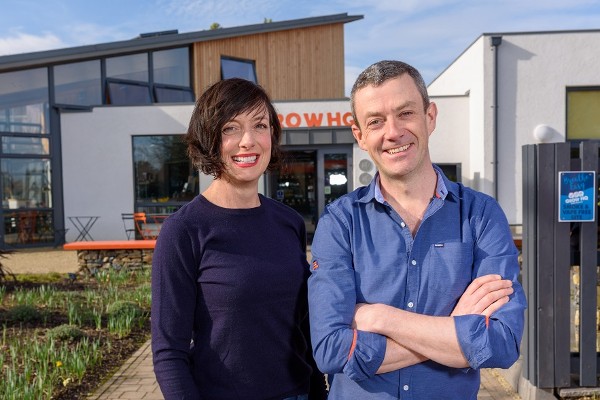 The fifth episode of series 2 of ‘GROW COOK EAT’ is set to air on Wednesday, April 10th and presenter duo founder of GIY Michael Kelly and the GIY Head of Community Development Karen O’Donohoe meet the experts behind growing broccoli in Kildare, they research and discuss plastics in our supermarkets and what it truly costing and Karen sports some crutches after a nasty fall during filming but she keeps on growing!

Michael heads to Kildare to meet Paul Brophy who is Ireland’s largest broccoli producer who grows 10 million broccoli plants each season; Paul discusses the pressures on the Irish horticultural industry and learns about the opportunities within the scale of production but also the barriers that this scale can place upon the future of the business. Paul also strongly encourages Irish consumers to seek out and demand Irish grown produce from their local supermarkets not solely for the benefit of business but for nutrition, economic and environmental reasons.

In episode 5 Karen and Michael did an impromptu experiment, buying 3 baskets of food from 3 different supermarkets, two that are popular national supermarkets and one local independent supermarket. Each basket purchased was made up of the 9 most common vegetables according to the CSO household survey. Michael says, “The first thing that jumped out from this was the sheer volume of plastics used in packaging the mainstream supermarket veg. In fact, all 9 vegetables in both of the main supermarket baskets were wrapped in plastic. It’s particularly galling when we consider how much of this packaging is not recyclable, leaving consumers with no option but to send the packaging to landfill.

But if the packaging wasn’t enough to make you despair, consider the air miles. It was striking how much of the veg was imported, even though all 9 vegs can be grown in Ireland and were in season at the time of filming. In fact, in one supermarket basket, only 1 vegetable out of 9 was actually grown in Ireland. It was once an anomaly to see a supermarket sell veg that could be grown in Ireland and for consumers to actually buy it. But with carrots from Nairobi, strawberries from Israel and the like, it’s now the norm.

Though the independent basket was more expensive, we have to bear in mind that there is always a cost to cheap food somewhere down the tracks. A cost in terms of employment and local jobs with growers leaving the industry in their droves as they can’t compete with cheaper imports. A cost in terms of nutrition and flavour as food that is local and seasonal is almost always tastier and more nutritious than food that has travelled from the other side of the world. A cost in terms of the planet we share – the carbon used in transporting food around the globe or the environmental impact of plastic packaging which uses a non-renewable resource (oil) in its production, and as a waste product has a devastating cost to our environment (and particularly our oceans).”

Viewers will also spot Karen on crutches following a disastrous tumble while running in wellington boots during filming the programme, but the show must go on! The fall actually took place on day one of filming as the always eager Karen ran at speed to fetch a cloth from the GIY store to clean the potting table for filming continuity… however just as she set off she took a nasty tumble and the result was a loud ‘pop’ which ended up being her tendon rupturing.

Karen put the pain to the back of her mind and carried on with the crew sitting in agony while planting Chillis in the greenhouse. After about two hours just as the day wrapped she finally went to A&E where she was immediately admitted for surgery on her foot. She promptly rejoined the team with a red cast made to look like a red Hunter wellington boot!

Chef Katie Sanderson takes the variety of Kale and shares a delicious recipe for gnocchi with kale broth and cais na tire cheese.

‘GROW COOK EAT’ is a very practical series, aimed at helping people with little or no knowledge of growing their own food. As well as the step-by-step guides to growing vegetables, the series showcases features on water harvesting and improving soil fertility.

The show is anchored at the home of GIY, at Grow HQ in Waterford City and each week the TV show also sees presenters Michael Kelly and Karen O’Donohoe travel to meet and visit expert food producers, chefs, and community food growing projects all across the country, plus delicious menu ideas will be shared weekly by Chef Katie Sanderson.

GROW COOK EAT airs each Wednesday evening at 8.30pm on RTE until April 24th; the show is sponsored by Bord Bia and StopFoodWaste.ie. For further details, the veg growing guides, lots of extra recipes and more info on each episode visit http://growcookeat.ie/