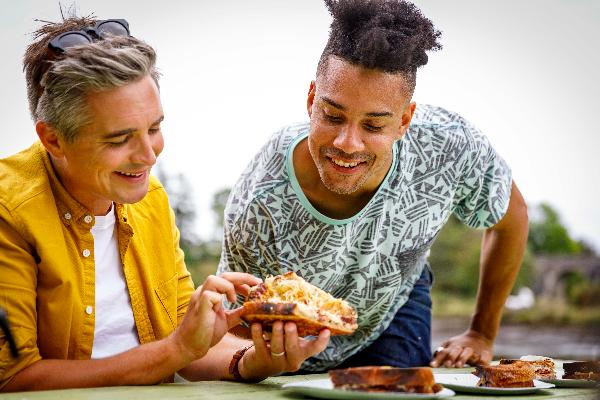 If ever there was a time to celebrate staycations it's right now! Presenter and food writer Donal Skehan and rising food star Nico Reynolds will star in a new film to be launched on RTE Player on 1st September. “Donal and Nico's Cheesy Road Trip” sees the two guys in a vintage camper van travelling the beautiful and picturesque trails of West Cork in search of the perfect grilled cheese sandwich.

Donal and Nico embark on a journey across the home of Irish dairy, West Cork, with a simple aim; to find the best cheese combination for their ultimate Irish cheese toasties. This film is fun, vibrant, engaging and informative, showcasing the best artisan cheeses Cork and Ireland has to offer. Nico and Donal are ambassadors for the EU funded Cheese your Way campaign managed by the National Dairy Council.

Donal said “I really enjoyed working on this mini-film with my pal Nico, I am a passionate advocate of Irish cheese and our farmhouse cheeses are some of the best in the world. It was the ultimate staycation to travel around the beautiful parts of West Cork and the real prize was making a perfect grilled cheese at the end of the trip. Nico and I used our individual inspiration to create our signature sandwiches with a few quirky ingredients thrown in for good measure!”

West Cork is home to some of the best Farmhouse cheeses in Ireland – from Mileens to Durrus, Hegarty Cheddar to Gubeen, it’s a cheese lovers paradise within this peninsula of great scenic beauty. The film starts at Gubeen Cheese, where the Ferguson family have worked the Gubbeen Farm for many generations.  The 250-acre coastal farm is situated one mile outside the fishing village of Schull, the Atlantic Ocean at one boundary and Mount Gabriel to the North as a backdrop behind the land, sheltering the pasture that has always supported the Gubbeen herd. Giana Ferguson was one of the first artisan cheesemakers in Ireland in the early 70’s and the cheese is now sold all over the world.

The guys then head off to Ballydehob to pick up more groceries for their cook off before sampling the famous grilled cheese sandwiches form Ron D’s food truck in the heart of Ballydehob. They then set off to Durrus Cheese to meet the cheesemakers and sample the various cheeses on offer. Started by another woman called Jeffa Gill in the 1970’s, situated on hillside valley of Coomkeen near Durrus. The cheese is produced using age old artisanal methods, with a Swiss cheese ‘harp’ to cut the curd by hand in a traditional copper lined cheese vat.

Nico Reynolds is a Pop-up Chef and owner of " Lil Portie" which jumped into international recognition after the restaurant was featured on Vice Medias Season 4 of F*ck That's Delicious with Action Bronson. He makes regular appearances on Irish TV in cooking segments like RTEs "Today show" and Virgin Media's "Ireland AM" and was in house chef for the TV programme "Lodging with Lucy". He has recently launched his own series on RTE Player called “Grill Seeker” which showcases his passion for cooking on barbeques.

Nico said “Being half Caribbean, I had to add my signature flavours to my grilled cheese sandwich and I included coriander and lime to elevate it to another level. I’m a huge barbeque fan so it was great to be able to cook the sandwiches on our portable barbeque on the beach at Galley Cove and then we had to have a swim afterwards!”

Donal and Nico’s Cheesy Road Trip will be available to stream on RTE Playter from 1st September and you can also watch on Donal Skehan’s You Tube Channel.

The film was directed and produced by Appetite Media with support from the National Dairy Council’s Cheese your Way campaign. www.cheeseyourway.ie