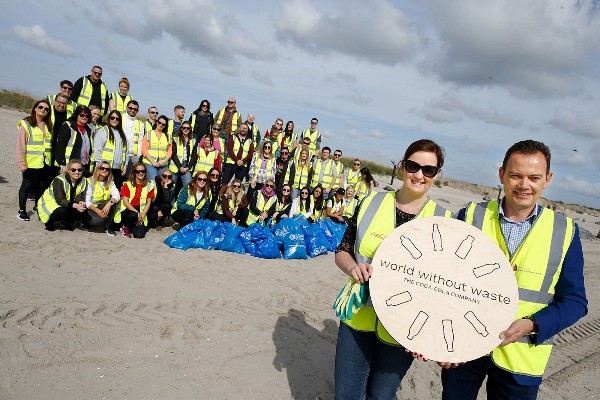 More than 150 Coca-Cola employees took time out of their busy work schedules on Friday to help clean-up Ireland’s coastline. The volunteering initiative, which took place ahead of next weekend’s Big Beach Clean event, is part of the company’s ongoing strategy to achieve a world without waste.

Together, Coca-Cola Hellenic Bottling Company (HBC) and the Coca-Cola Company employ 1,600 people in Dublin, Ballina, Wexford, Drogheda, Lisburn, Cork and Tuam, with employees from all locations took part in six beaches cleans across the island to help remove marine litter from Ireland’s coastline. An outstanding 213 bags and an estimated 1.5 tonnes of litter were removed from the coast over the course of the day thanks to the trojan effort of volunteers.

Coca-Cola’s global sustainable strategy, World Without Waste, aims to design more sustainable packaging and collect the equivalent of every bottle and can it sells by 2030. The strategy also aims to inspire behavioural change in relation to recycling and the responsible disposal of waste.

Through this volunteering effort, Coca-Cola employees were proud to show leadership in removing litter from the marine environment, and it is hoped that their efforts will encourage more people to join the movement to create a litter-free world.

Matthieu Seguin, General Manager, Coca-Cola Hellenic Bottling Company (HBC) Ireland and Northern Ireland: “I’m very proud of all employees from across the Coca-Cola system who have taken to beaches across Ireland to launch the Big Beach Clean. Clearing beaches of unwanted litter not only benefits the marine environment but will hopefully inspire others across the island to do the same in the coming weekend.

“Our participation in the Big Beach Clean is part of our efforts to help create a world without waste. We recognise that with our market-leading brands comes a responsibility to help tackle the issue of waste at its source. That is why, in addition to this volunteering initiative, we recently invested in recycled plastic in order to eliminate 2,000 tonnes of virgin plastic from circulation annually.”

For more information about Coca-Cola’s commitment to creating a World Without Waste, visit https://ie.coca-colahellenic.com | www.coca-cola.ie.

You too can play your part in the Big Beach Clean!

Organised by An Taisce’s Clean Coasts Programme and Keep Northern Ireland Beautiful, the 2019 Big Beach Clean will run from Friday 20th to Monday 22nd September. It has the backing of the International Ocean Conservancy, making it a part of the world’s largest coastal clean-up event and marine litter survey.