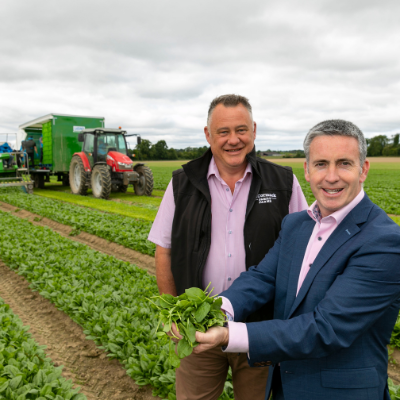 McCormack Family Farms, the award-winning producer of baby salad leaves, herbs and edible flowers has welcomed the first harvest of organic Irish spinach today at its farm in Boycetown, Kiltale Co. Meath. This development sees the brand build on its position as the largest grower of salad leaves in Ireland to also become the largest Irish producer of organic spinach, and it marks a new venture for the company into organic farming. The company will continue to produce its existing range of unwashed salad leaves to retail and foodservice outlets, which naturally provides a longer shelf-life and keeps the produce at peak quality. McCormack Family Farms Organic Irish Spinach can be found in Lidl stores nationwide, as well as under private label in other retail chains.

McCormack Family Farms is a second-generation family farm that has been in business for almost forty years, and it saw the opportunity to provide a consistent supply of organic spinach to the retail market throughout the domestic growing season. While doing so, it would also be able to produce Irish-origin spinach at scale which is a first for the retail market. Before this, supply at a large retail level was dependent on importing produce from outside of Ireland year-round; and for countries in Southern Europe, the months of June, July and August are too hot to produce adequate quantities. The new offering has been in development for two years, with a comprehensive process from land preparation, sowing of seeds, to harvesting the first crop of spinach across a 10-hectare site.

Local TD and Minister for State for Business, Employment and Retail Damien English attended the first season harvest and said, “McCormack Family Farms is an impressive business embedded in its local community of Kiltale, who is making a real impact in the food production sector in Ireland.  They are part of a very talented and progressive SME community in Meath that are driving employment opportunities and economic activity in the county.  I am impressed by their ambition, determination, and innovation in harvesting the first organic Irish spinach & expanding their offering for their customer base.  I wish Stephen and the team at McCormack Family Farms every success into the future.”

Speaking about the launch, Stephen McCormack, Managing Director, McCormack Family Farms said, “We’ve been farming as sustainably as we can for nearly four decades, so it’s great to be here at the first harvest of our organic spinach. The decision to try organic farming is not a financial one - our initial motivation was to be able to guarantee the supply of organic spinach to the market. As part of our ongoing sustainability commitments as a certified member of Bord Bia’s Origin Green initiative, we’re delighted that by growing organic spinach during the Irish season we can save 132 tonnes of CO2 emissions compared with importing from further afield."

Established in 1984, by Eddie McCormack, McCormack’s farm first began growing vegetables and trading at a historic Dublin Corporation Fruit and Vegetable market. His son Stephen took over the business in 2000 and in the intervening years diversified into growing baby salad leaves and herbs. The business now operates off seven hundred acres of farmland including three acres of Polytunnels and three acres of Glasshouses. McCormack’s Farm is supported by 100 staff off-season and 130 during peak season. McCormack Family Farms is a certified member of Bord Bia’s Origin Green, the world’s first sustainable food and drink programme along with holding international certification of Global GAP, a widely recognised standard for good farming practices; and BRC certification (British Retail Consortium), which upholds excellent standards in food safety and supply chain.