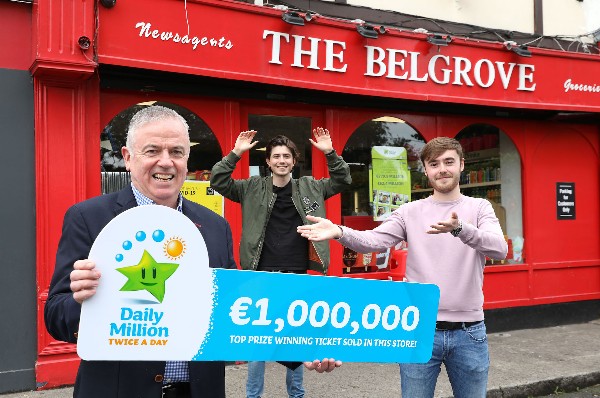 Celebratory imagery from The Belgrove in Clontarf, Dublin which sold Wednesday’s €1 million Daily Million winning ticket to be issued by MacInnes Photography.

A well-known North Dublin newsagents has been announced as the store where Ireland’s newest millionaire bought their winning National Lottery ticket worth €1 million.

The National Lottery revealed that The Belgrove newsagent on Vernon Avenue, Clontarf, Dublin 3 is the store where this lucky player bought their winning Daily Million ticket from yesterday’s 2pm draw.

Speaking on selling the winning ticket, Michael Kenny, store owner of The Belgrove for more than 16 years, said: “I am absolutely thrilled. I have run this store here for more than 16 years and it’s the biggest winner we’ve sold by a long shot so we’re delighted with that. The Belgrove is a traditional-style community newsagents – one of the last of its kind. We have a strong local custom here which is predominantly from the local Clontarf community – sure I grew up nearby in Clontarf myself. I really do hope the winner is one of our regular customers and we’ve been spreading the word this morning for everyone to check their tickets so there is a great buzz about Clontarf today. It’s a great day for the town.”

A National Lottery spokesperson said: “We have yet to hear from this lucky winner so we’re asking all our Daily Million players who bought a ticket for yesterday’s 2pm draw in the Belgrove to check their tickets very carefully. If you do happen to be this lucky winner, be sure to sign the back of the ticket and contact our prize claims team on 1800 666 222 or email claims@lottery.ie and we will make arrangements to get your prize.”