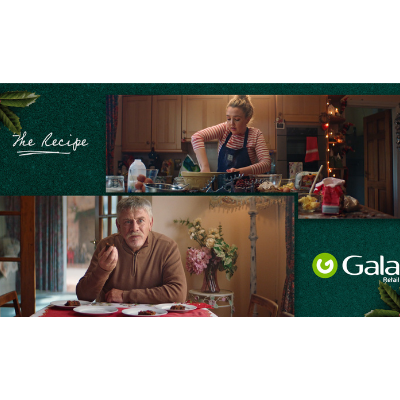 Gala Retail has made its first foray into the highly competitive Christmas ad arena with the launch of its first ever Christmas advertisement, a heart-warming glimpse of a family’s determination to uphold a sentimental Christmas tradition.

The film piece is titled ‘The Recipe’ and the story centres around a young girl, who with the help of her father, tries over and over again to recreate her late mother’s famous Christmas cake recipe. Each new baking attempt brings another disappointing result - and another trip to Gala - until she receives a very special surprise gift on Christmas eve.

“Gala Retail is thrilled to launch its first Christmas ad, ‘The Recipe’ this year. Christmas is often a time where old family traditions are upheld  and we feel that ‘The Recipe’ perfectly captures the importance that traditions, such as an old family recipe, hold for Irish families at this time of year.

“The events of the past two years have meant that people have been disconnected from each other in a way like never before and we wanted to take the opportunity to tell a heart-warming story about the importance of family and tradition at this time of year and remind people that with stores in communities across Ireland, Gala Retail is here for them this Christmas, and all year round.”

The ad was written and created by agency Verve|Showrunner, produced by 2021 Kinsale Sharks Production Company of the year, Banjoman, and directed by Claire Byrne, with original music from Video Blue.

Creative Partner in Verve | Showrunner, Sam Moorehead adds: “Keeping the tradition of family recipes alive can help make loved ones feel close again at Christmas, giving you a warm sense and taste of nostalgia. But as recipes are lost, forgotten and misplaced, a bit of trial and error can come into play, which is where local community stores like Gala step in to save the day when you need those last minute ingredients that are essential to your Christmas traditions and celebrations.”

The film is available to watch online from today, as well as paid VOD and on Gala’s social channels.