Record Breaking Cavan Syndicate of 295 Members Claim €256,142 EuroMillions Prize and Time is Running Out for Lotto Winner to Claim €28,040 Prize on Ticket Sold in Monaghan 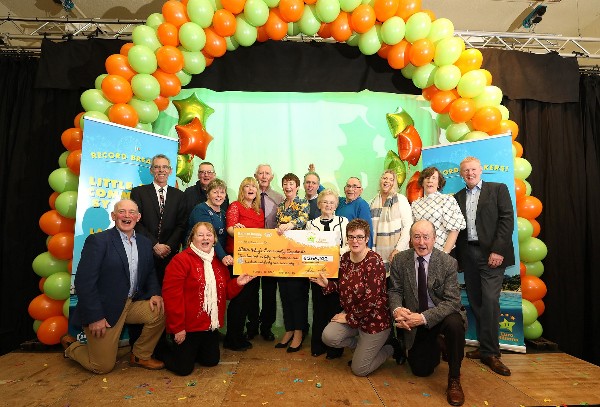 295 residents of the small townland of Drumgoon, Co. Cavan are celebrating today after they were presented with a cheque for €256,142 by National Lottery officials - making them the largest syndicate in Irish history to win a top tier lottery prize. The kind-hearted community group who won the Match 5 + Lucky Star EuroMillions prize on Tuesday 21st January initially came together as a fundraising initiative for local community facilities.

The town of Drumgoon is in a rural area near Cootehill in Co. Cavan and is close to the border with Co. Monaghan. The 295 person ‘Little Rays’ EuroMillions syndicate is a unique fundraising project which was launched to provide vital funding for a community childcare facility. As part of the initiative, individuals and households in the community contributed €100 towards the funding drive with a portion of all contributions used to purchase a EuroMillions ticket for the ‘Little Rays’ syndicate.

Speaking at a special celebratory event in Drumgoon, Co. Cavan today, head of the syndicate, Aidan McCabe said, "We were fundraising for after school facilities in Gallonray House and we asked people and families in the area to contribute €100 to try and raise about €30,000. We reached our target, thankfully, and in recompense for people at the time, the incentive was that we would purchase a EuroMillions ticket for ten draws with each member having an equal share of the ticket. The big message here is that we’re really, really delighted that the people who have supported us so much over the years are getting something back now. There has been an incredible buzz in the community for the past number of weeks and even more so now that we go into the history books as Ireland's biggest ever winning syndicate."

The lucky Drumgoon community group have now become the biggest ever syndicate to win a top tier prize in a National Lottery game. Previously, the biggest ever winning lottery syndicate in Ireland was a 291 person syndicate from Confey GAA Club in Leixlip, Co. Kildare who won a €200,000 Lotto prize in 2004.

Meanwhile, the National Lottery have reminded Monaghan Lotto players to check their tickets as a Lotto prize worth €28,040 from Saturday 30th November is set to expire next week. The winning ticket was a Quick Pick ticket which was purchased on Friday 29th November at the Circle K service station on the Monaghan Road in Clones, Co. Monaghan.

A spokesperson for the National Lottery said that the lucky winner has just one week left to claim their prize, which is due to expire on Friday 28th February 2020.

Want to share that winning feeling? Play EuroMillions. Tonight’s EuroMillions jackpot is an estimated €40 million. Play in-store, online at www.lottery.ie or by using the National Lottery app by 7.30pm by this evening.