Record grocery sales as Ireland marks a Christmas like no other 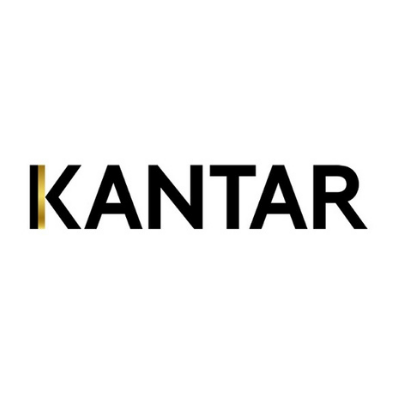 Take-home grocery sales in Ireland rose by 17.0% in the 12 weeks to 27 December 2020, the latest figures from Kantar show.  A record-breaking €1.2 billion was spent on groceries in December, making it the busiest month ever as families navigated evolving lockdown restrictions and prepared for Christmas.

Emer Healy, retail analyst at Kantar, comments: “Christmas was certainly different this year, but pared back festivities didn’t stop Irish families from looking for ways to keep spirits high.  Even though there was a temporary easing of restrictions on eating and drinking out in December, most of us still turned to the supermarkets to provide some sorely needed festive cheer.

“As an extraordinary year drew to a close, the average shopper spent €134 more on groceries in December than they did last year.  Wednesday 23 December was the busiest shopping day of the year when almost half of the Irish population hit the supermarkets.  But overall grocery spend was more spread out during the run up to Christmas than we’d normally expect to see, as consumers with more time on their hands at home took the opportunity to prepare early.”

Fewer guests to host meant a smaller scale feast and shoppers spent €1.2 million less on whole turkeys over the four weeks to 27 December compared with the same period last year.

Emer Healy continues: “The traditional turkey was off the menu for many this Christmas as lots of Irish households favoured smaller cuts of meat.  In a break from the norm, we spent €938,000 more on turkey rolls, €398,000 extra on roast beef and an additional €480,000 on roast pork in December.  However, some classic festive favourites prevailed and sales of sprouts were up by 7.3%.

“Although not a traditional Christmas, shoppers still endeavoured to make it a merry one and to treat themselves after a tough year.  Our collective sweet tooth saw an extra €6.7 million spent on chocolate confectionery this December.  We also parted with €3 million extra on cheese and, as we all raised a glass to the end of 2020, alcohol sales soared by 33%.”

Lidl stood out among the retailers as the fastest growing grocer this period, with its success starting in the alcohol aisles where sales grew by 70.0% in the three months leading up to Christmas.  Overall Lidl gained 0.9 percentage points of share this period.

Shoppers trading up resulted in an additional €1.6 billion spent on branded products this year, while sales of premium own label items soared by 17.8% over the most recent twelve weeks.

Emer Healy continues: “With our usual festivities curtailed, Irish shoppers splashed out on household names and premium products to mark the occasion.  Supporting Irish was the order of the day, and both Keoghs and Avonmore grew ahead of the market over the festive period.”

Branded sales were particularly strong at Aldi, where shoppers spent an additional €11.6 million on well-known labels during the 12 weeks to 27 December.  Aldi holds an 11.2% share of the market this period and increased its sales by 16.4% year on year.

Rounding out a strong year for online grocery, Irish households spent €133 million through digital channels over the past 12 weeks.

Emer Healy explains: “The popularity of online grocery shopping is no flash in the pan, and digital orders accounted for 4.1% of all grocery sales in December.  That figure was only 2.8% in December 2019, hammering home an impressive year in terms of sales and capacity growth.  New shoppers continue to make the move online, and we expect digital sales to go from strength to strength in the year ahead.”

Bolstered by their strong online presence, Tesco and SuperValu are neck and neck for the position of Ireland’s second biggest grocer and both hold a 22.1% market share this period.  Shoppers visiting SuperValu more frequently, adding up to an extra 730,000 trips, helped the retailer to grow ahead of the market and narrow the gap with Dunnes.  Meanwhile, consumers making bigger shops was the key driver of Tesco’s strong growth over the past 12 weeks.

Dunnes holds the largest portion of the market at 22.5%.  Shoppers spent more per trip in Dunnes than in any other retailer, helping the grocer to grow its overall sales by 11.4%. 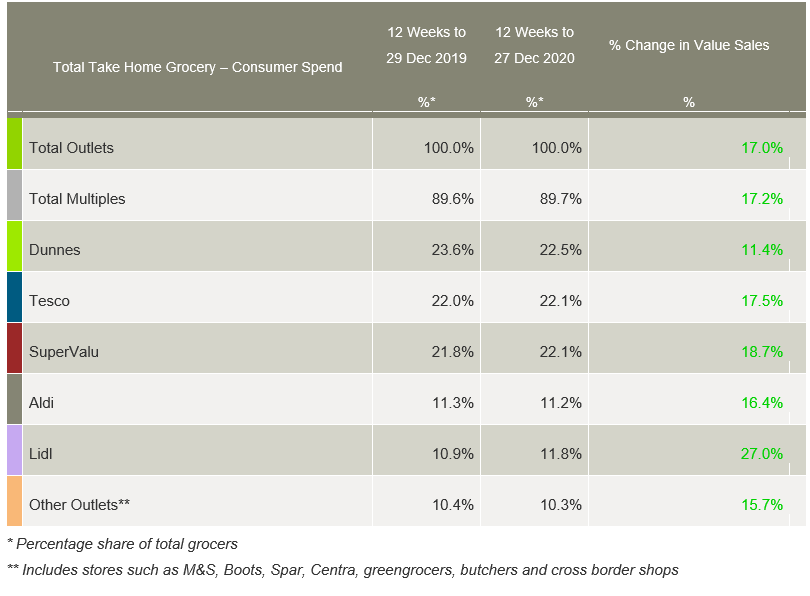