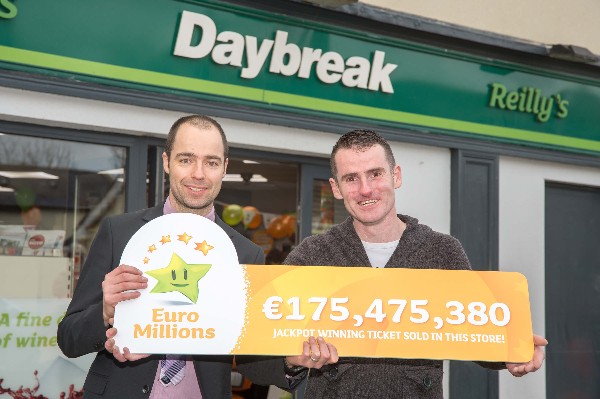 Reilly’s Daybreak in Naul, Co. Dublin has sold the winning €175 million Euro Millions ticket, which is the biggest jackpot in Irish history. Les Reilly and staff at the store were delighted with the news, with Reilly’s Daybreak also due to receive a €25,000 prize for selling the winning ticket.

This is not the first time Reilly’s Daybreak has seen a big win. Six years ago, a National Lottery ticket bought by a syndicate of staff from the store won €25,000. With Friday’s estimated Euro Millions jackpot standing at €16 million, the store is expecting a spike in interest in tickets in the event that there is a repeat win.

Commenting on the record win, store owner Les Reilly said: “We cannot believe that our shop had the winning ticket. It is fantastic, not just for the winners, but also for us and the community of Naul. We are a small community and this news brings a great buzz to everyone. As a result of the win, we’re already seeing more people come in store to pick up a ticket for Friday’s Euro Millions and Saturday’s National Lottery draws.”