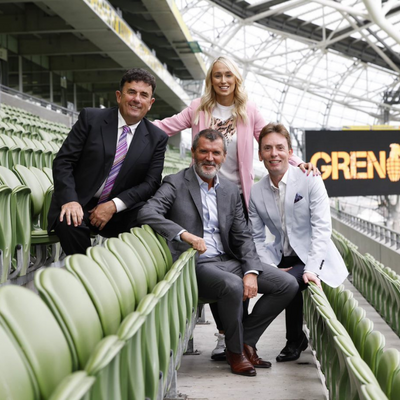 315 people were in attendance on the day and the main sponsors were National Lottery, Musgraves, Grenade, while supporting sponsors were Alpro, Mars, DHL and Kellogg’s, with support from Tesco, Diageo and FMI. Eoin Kellett, Managing Director of Mondelez Ireland, organiser of the event since its inception, welcomed attendees on behalf of the IGBF, explaining how each contribution to the Fund makes a huge difference to the work it carries out and the families around the country that it helps.

The Sporting Legends Lunch has become one of the most anticipated afternoons in the IGBF’s calendar of events and this year’s was no exception, as guests enjoyed a super meal, followed by an entertaining and enlightening conversation with the three stars of soccer and snooker, expertly guided by the easy-going charm of Des Cahill.

Stephanie Roche spoke about the emergence of the Irish women’s soccer team in recent years and the dichotomy between their performances on the pitch and the way they were often treated off it, drawing parallels between their quest for fair treatment and Roy Keane’s infamous stand in Saipan.

Ken Doherty provided a wealth of anecdotes from his stellar snooker career, many involving his hero, the late Alex Higgins, while another story revealed how he ended up on the receiving end of the “Roy Keane stare”. Roy Keane has proven himself one of the most entertaining sporting guests in the country, renowned for his passion and honesty. Roy spoke about his time as a player, revealing that he once came close to signing for Bayern Munich, while also providing an insight into the mindset that saw him become one of the most effective and feared midfielders in world football.

All three generously posed for selfies with attendees, while Des gamefully stepped into the role as raffle co-ordinator, picking the winning tickets for the many prizes, which included a weekend in a top European capital, premium tickets to see Garth Brooks and tickets to see Ireland take on Australia in the autumn rugby international. For more information on the work of the IGBF and forthcoming events, visit www.igbf.ie