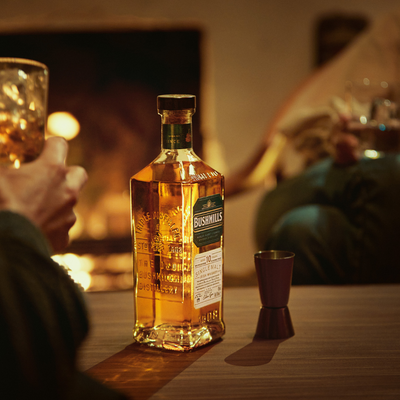 Airing initially in Germany and Bulgaria from November, to then be rolled out across other European markets, the 60’’ TVC is part of an integrated, multi-channel campaign promoting the Bushmills Irish single malt range as well as its iconic Black Bush Irish whiskey.

Bushmills is the oldest licensed distillery in the world, drawing its water from the River Bush in County Antrim for over four hundred years. This heritage, combined with Bushmills’ evolution and history of innovation, inspired the new campaign ‘Pursuing Perfection Since 1608’. It is to the landscape of outstanding natural beauty surrounding Bushmills and the legendary Giants’ Causeway, that the audience are transported in ‘Pursuing Perfection’.

The ‘Pursuing Perfection’ spirit comes to life in the adventures of a young protagonist, Rory, beginning with a homecoming, a reconnection with family, and friends in the thriving surfing community nearby.  The passing of time is documented in a subtle changing of seasons, while the stuff of life – friends, relationships, work, and play - evolves along with his surfing prowess.

The story is not about technical greatness or the conquest of a great wave. It is about a sense of pursuit rather than the idea of achieving perfection itself, encapsulating the spirit of Bushmills and the mindset of its people, living, and working together through generations.

For the Bushmills brand, led by its iconic single malt whiskeys, the release of ‘Pursuing Perfection’ represents a major milestone. The Bushmills Global Brand Team are delighted with the production and confident that it will reach and connect Bushmills with consumers in key markets on a deep and emotional level.