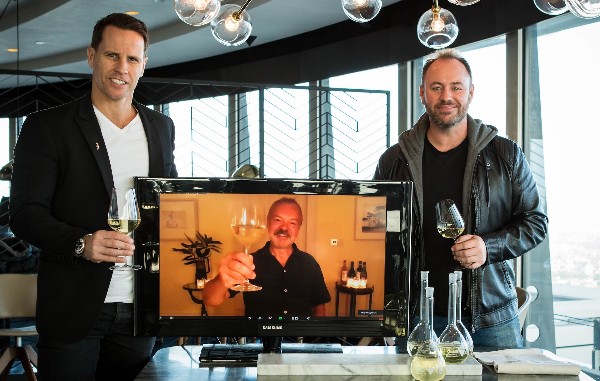 Graham Norton’s collaboration with Kiwi producers Invivo & Co goes from strength to strength as the business partners are set to produce their ten millionth bottle of wine this year, a landmark moment since their first run of 14,000 bottles of Marlborough Sauvignon Blanc in 2014.

The news comes as Norton is set to release his sixth vintage of Graham Norton’s Own Sauvignon Blanc with Invivo & Co this September in the UK and Ireland, after making it at home this year thanks to the pandemic.

Ireland-based Norton dialled in his Kiwi business partners - Tim Lightbourne and Rob Cameron - from his home in West Cork, where he has been spending lockdown, on a summer’s evening in July (9pm).

Invivo Co-founders Tim and Rob had couriered six Sauvignon Blanc samples to Graham, harvested in Marlborough, New Zealand, in March this year, along with a winemaking kit filled with beakers, which Graham set-up at home.

18,311 kilometers and 11 hours ahead of Norton, the Invivo co-founders arranged their winemaking set up at The Sugar Club restaurant, Sky Tower, Auckland. Situated at 1,080 feet high, the spot offered enviable panoramic views across the city and harbour as the sun rose.

It was an early start for the Lightbourne and Cameron at 8am with Norton noting “It’s a bit early for you guys, everything is going to taste of toothpaste!”

Over a two-hour Zoom call, the trio collaborated to create and sign off Graham Norton’s Own Sauvignon Blanc 2020 in a process that Norton likens to “being an air steward who is being talked into landing the plane.”

Invivo co-founder and winemaker Rob Cameron says “We always look forward to our blending date with Graham as he is such an experienced winemaker now (this is his sixth vintage.) It’s like he’s a full-time member of the winemaking team! Graham seemed to dial straight into what was working and what he was after.”

On his new wine, Graham comments in his blending video, “I think it’s delicious and has that New Zealand zing. It’s soft and fruity. It’s full but floral-like. It’s sunshine in a glass.” On this year’s vintage, he says “This seems like a really good year.”

Cameron adds “Graham managed to weave five quite strong personalities together in the blend that normally might have clashed. The result - Graham Norton’s Own Sauvignon Blanc 2020 - is focused but expansive in the palate. It’s precise in respect of its fruit and acidity balance but it also has layers of concentration and a long and deliberate finish. It will really develop in bottle with new fruit characters emerging over the next 12 months. The only thing missing was the post blend debrief in-person!”

Graham Norton’s wine and spirits range – that now features a Prosecco, Sauvignon Blanc, Rose, Shiraz and two Irish gins (including one pink) – has clocked up more than 200 accolades over the years and Graham is a shareholder of Invivo & Co.

Graham Norton’s Own Sauvignon Blanc is available nationwide with an RRP of €14.99