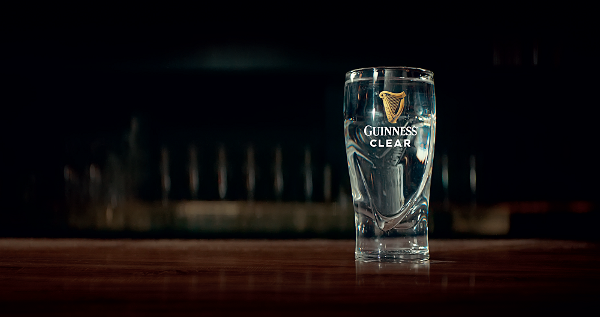 The team behind GUINNESS knows there’s nothing better than spending time with friends and enjoying the rugby with a pint of the black stuff in hand but are also aware that sometimes, less is more and swapping GUINNESS for water or choosing not to drink alcohol at all should be celebrated. To this end the GUINNESS team has launched a new tongue-in-cheek product- GUINNESS Clear. GUINNESS Clear is 100% H20 and available from all good taps nationwide.  GUINNESS is rebranding water as GUINNESS Clear to make ordering water an active and positive choice.

GUINNESS Clear will be treated just like any new GUINNESS beer with a new TV ad going live in GB & Ireland for the GUINNESS SIX NATIONS from February 1st.  The 30 second ad was created by AMV BBDO, directed by top US director Tom Kuntz (famous for the Old Spice commercial, The Man Your Man Could Smell Like) and pokes fun at all the clichés of traditional beer advertising, even employing the GUINNESS Clear master brewer to explore the unique taste and properties of GUINNESS clear. We see adoring slow-motion product shots and see satisfied drinkers reacting with delight to the amazing taste of tap water. The TV ad culminates with the end line ‘Sometimes less is more. Moderate your drinking’. For a preview of the advert please see this link: https://youtu.be/907B0pAed_k.

There will also be a GUINNESS Clear social media campaign that can be followed via #GuinnessClear along with a heavy presence at Home Nations’ stadiums, including branded water fonts and GUINNESS Clear sampling teams giving water to match day goers.

By drinking plenty of water at a social occasion, the body is kept hydrated and it helps people to moderate their drinking. Water is a positive choice and should be celebrated.

Speaking at the launch of GUINNESS Clear Brian O’Driscoll said:

“GUINNESS Clear is a positive initiative with a great message, it engages with people and sports fans alike and reminds people to have fun while at the same time being aware of responsible drinking. I’ll certainly be mindful of it myself as the GUINNESS SIX NATIONS kicks off.”

“At GUINNESS, responsible drinking is something we take very seriously. With the launch of GUINNESS SIX NATIONS we wanted to ensure we delivered this important message to sports fans in a compelling way and so GUINNESS Clear was born. We think the light-hearted approach delivered through our GUINNESS Clear product launch will drive conversation and put responsible drinking to front of mind throughout the GUINNESS SIX NATIONS and beyond. We want to make sure that ordering water, no matter the context, is an active and positive choice by the millions of fans who will be watching and attending the GUINNESS Six Nations over the next six weeks”.

The GUINNESS Brand is a proud supporter of Irish rugby and the title sponsor, official beer and official responsible drinking partner of the GUINNESS SIX NATIONS, Rugby’s Greatest Championship.