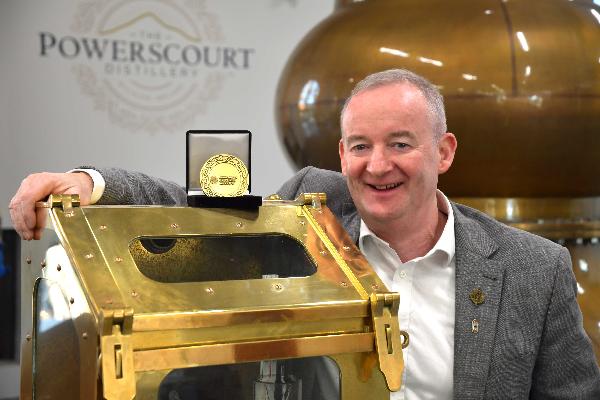 Drinks Ireland|Irish Whiskey Association is the representative association for the Irish whiskey industry. The Association’s Chairman’s Awards take place biennially and will be awarded this year by outgoing Chairman David Stapleton, founder of The Connacht Whiskey Company. The awards recognise the people, distilleries and industry partners that have made an outstanding contribution to the development of the Irish whiskey industry and category. Noel has played a leading role in the establishment of the Drinks Ireland|Irish Whiskey Association.

In 2017 Noel was inducted to the World Whiskey Hall of Fame. Passionate about his craft, he has devoted over 30 years patiently honing his craft and learning from former masters. Joining Powerscourt Distillery in 2017 he  played a huge part in the design and commissioning of the modern plant and the fist distillate was produced in June 2018.

Over the last few years he has unveiled the first expressions from the Powerscourt Distillery with spirit he formerly distilled in the Fercullen range of Irish whiskies – 8YOBlend, 10YOGrain, 14YO Single Malt in November 2018 followed by an 18YO Single Malt 2019 and most recently the Fercullen Five Elements 18YO Single Malt. A four style finish, limited edition of just 1500 bottles.

Noel commented:   “Since I started in the industry, Irish Whiskey has been turned on its head. As a Master Distiller, I am proud to be part of an innovative wave that moved Irish whiskey beyond just triple distilled, non-peated expressions. We have since seen a rapid and exciting increase in new releases of interesting, high-quality Irish whiskey, with much more to follow. Our industry is one of great resilience, ingenuity confidence, and creativity, and I look forward to a bright future for Irish whiskey.”

Commenting today, David Stapleton, Chairman of Drinks Ireland | Irish Whiskey Association, said: “I am honoured to present the Chairman’s Awards to such a talented and tenacious group of people who have contributed significantly to the revival of the Irish whiskey industry. The awardees represent the dynamism and ingenuity which is central to our industry.”

The Powerscourt Distillery team are delighted for Noel & his family and congratulate him on his well-deserved recognition for a lifetime of outstanding contribution to the Irish whiskey industry.  Together we look forward to exciting times ahead for Irish Whiskey.