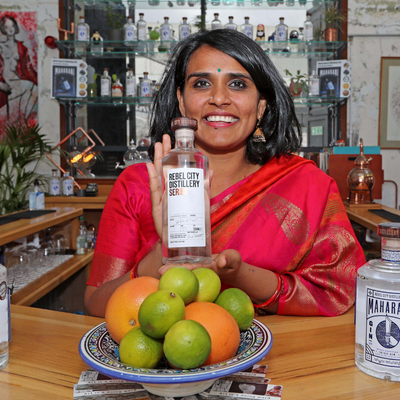 Founders Robert and Bhagya Barrett combine long-standing craft with a splash of cultural creativity in an iconic setting with the launch of the distillery tours as the next part of the long-term plans for the first distillery in the city in 50 years.

Located in the repurposed Ford Car Factory, a Cork Landmark that has lain dormant for decades, the tour gives visitors insight into the distilling and blending processes that created the brands first offering, Maharani Gin, and the soon to be released, Ireland’s only publicly available Absinthe.

The founders were joined by the Deputy Lord Mayor Damian Boylan to officially launch the tours.

Local media, influencers and friends and family of the distillery were treated to a preview while sipping Maharani G&T’s, before being treated to an exclusive taste of the brand-new Absinthe, the first of its kind in Ireland, which they also launched at the event.

“I was delighted to officially open the Rebel City Distillery Tours. The docklands in Cork are steeped in history, and it brings me great joy to see new life here, and that visitors from near and far will be able to get a taste of the fusion of old and new that I have seen here today.”

“Opening our distillery to the public with our tours, and our soon to come Spirits School has always been our plan from the moment we found the location. We want to share the scientific and creative process behind the brand, we can’t wait to show what we have been doing – and how we have been doing it.”

“The concept for Rebel City Distillery has always been to do things a little different, while still connecting with the heritage of the spirits and of the world around us. We have been innovating since we first launched Maharani in 2020, and we are incredibly proud and excited to be producing our next product, Rebel City Distillery Absinthe which will be the only Irish absinthe available.”

The Absinthe, which is distilled on site in small batches and has handwritten, authentic labels, was created using a base recipe that Rebel City discovered in a French book dated 1871 and given the unique Rebel City twist.

Blended with grande wormwood, green anise, and florence fennel, the Rebel City Absinthe pours clear, unlike previous bottles and the signature serve of Absinthe and iced water transforms it from crystal clear to a semi opaque white.

Bottles from the first batch of Absinthe (ABV 55%) will be available to purchase soon on the Rebel City Distillery website.